Thanks to Tom Rivers at OrleansHub.com for the story and cutlines, and thanks to Jim Baker for sharing his photos!

Jim Baker battled freezing rain, hypothermia to finish in 3:45. Two other Albion graduates completed the course as well. First-time runner Evan Dumrese, class of 2000, and veteran runner Roger Bolton, class of 1988 and five-time Ironman triathlete, finished in less than three and a half hours.

Baker, 55, of Kendall ran the prestigious marathon on Monday and finished in 3 hours, 45 minutes.

“What a great feeling,” he said Tuesday evening. “I really enjoyed it this time.”

He ran the race two years ago and was a minute shy of 5 hours. That day it was hot and humid and Baker said he was in distress quickly into the race and had to struggle to get to the finish line.

The soreness and the slower-than-expected time two years was more than a tough day of running. Baker found his times didn’t rebound in races after that marathon. He went to the doctor and was diagnosed with colon cancer. Photos courtesy of Jim Baker: Jim Baker, 55, of Kendall is pictured near the start of the Boston Marathon. He toured the city with his family over the weekend before the prestigious race on Monday.

Baker had surgery to remove a plum-size tumor. He started chemotherapy in June 2016. After seven months of treatment, his doctors declared him cancer-free on Jan. 13, 2017.

Baker kept running during chemo. It wasn’t his usual 8-minute mile pace. It was much slower, but he kept going, fighting nausea.

When he completed his treatments, he set a goal to qualify again for Boston and have a better experience there on race day.

Last Sept. 17, when he was 54, he finished the Rochester marathon in 3 hours, 35 minutes. That was 5 minutes faster than he needed to qualify for Boston. Baker has been training all winter, with some long runs at 18 to 20 miles.

He was ready for Boston. But Monday the weather was horrible, with hard rain throughout the race and temperatures in the 30s. There were giant puddles throughout the course that soaked sneakers.

Baker felt good, really good during the first half of the race. He reached the halfway point in 1:45:05, which had him on pace for a 3:30 marathon. But the cold weather took a toll. At the 15-mile mark Baker started to cramp from the hypothermia. Many runners had to leave the course for medical treatment.
But Baker pushed onward.

Jim Baker was in good spirits at mile 18 of the Boston Marathon despite running in the freezing cold.

The crowd still came out despite the onslaught of rain, and they were loud along the course. Baker said they lifted his spirits and helped keep him going. His wife Stacey and their daughter Megan also were there cheering him on. His son Kyle and many of his friends followed his progress on-line. The Boston Marathon posts updates on a runner’s times about every 3 miles. Baker was slowing down a little after the halfway mark but was still posting a good time, much faster than the race in 2016.

Before the final right turn, Baker could hear the roar of the crowd.

He was drenched when it was over and suffering from hypothermia. He didn’t stop shaking until an hour and half after crossing the finish line.

He met up with many of his running friends from the Rochester area when it was over. Baker said he has made many good buddies since he started running 11 years ago when he was 44. He works as a chemist for Kodak. He would go for walks during lunch breaks at work more than a decade ago, but Baker said that walking didn’t do anything to chip away at his extra pounds. He initially couldn’t run more than 200 yards without stopping. But he didn’t give up.

Conquering 2 miles while running was a milestone. He ran his first race at a 10K (6.2 miles) and enjoyed the energy and people at the races. He signed up for more races and joined the Bagel Bunch, a running group in Greece. 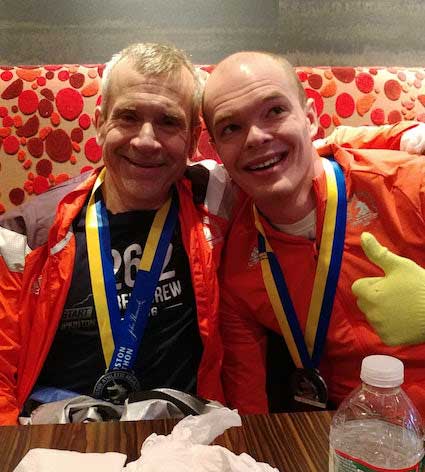 Jim Baker enjoys a post-race celebration with Jason McElwain, another Rochester area runner. The two often went on training runs together as part of the Bagel Bunch. McElwain is one of the Rochester’s top long distance runners. He ran Boston in 3:10:28.

He wants to lower his time at Boston next year. He would like to run the race when the weather is ideal, about 50 degrees without punishing rain. Two years ago it was way too hot, and Monday was a freezing deluge.

Despite the difficult conditions on Monday, Baker said he will cherish the memory.

“The first time I did it, it was a disaster,” he said about the race two years ago. “But I will remember this one because I had so much fun with it. I just want to improve on it.”

Baker’s upcoming running calendar includes the Shoreline Half Marathon on July 14 in Hamlin, the Metro 10 race in Albion (a 10-miler on Aug. 18) and the Rochester marathon in September.

Baker is an Albion native. He has lost 40 pounds since he started running. He credits the sport with saving his life. Running made him more in tune with his body. When he was running slower than his usual pace two years ago, he went to the doctor and was diagnosed with cancer. He had no other warning signs. He had no loss of appetite.

He was able to have the tumor removed and completed chemo before the cancer spread.

He wasn’t the only local finisher at Boston. Roger Bolton of Albion finished in 3:20:48 and Evan Dumrese, a Scottsville resident who grew up in Albion, completed the course in 3:25:33. Any other local finishers are welcome to send a note to marissa@albionalumni.org and news@orleanshub.com.

Alumni News Photos Sports Spotlight Where are they now?