Alumni Board Member honored for volunteerism

Congratulations to Board member Jean Shervin ’52!

Thanks to Tom Rivers at OrleansHub.com for the story and cutlines. 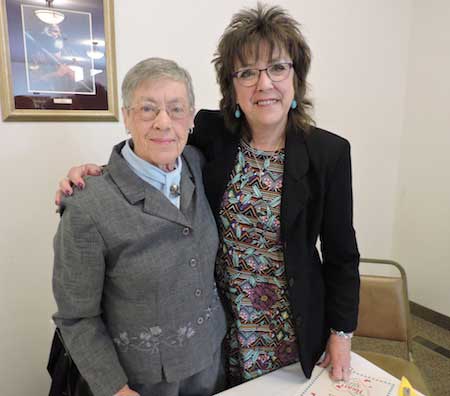 Orleans Hub photos: Jean Shervin of Albion, left, gets a hug from her daughter Jan Albanese at Hospice of Orleans’ annual meeting and volunteer appreciation luncheon Thursday at the Medina United Methodist Church. Shervin was named Volunteer of the Year by Hospice.

MEDINA – Jean Shervin has been volunteering since she was in grammar school, and she has carried that spirit of helping others throughout her life.

Shervin, 84, of Albion on Thursday was honored as Volunteer of the Year by Hospice of Orleans County at their annual meeting and volunteer recognition luncheon at the Medina United Methodist Church.

Shervin’s first volunteer efforts were with Red Cross during World War II. She learned how to knit so she could make squares for afghans for servicemen.

“I’ve been volunteering for different agencies ever since,” she said.

Shervin is a regular volunteer at Hospice, not only helping with fundraisers on special occasions, but serving meals at the Martin-Linsin residence two nights a week.

Being honored by Hospice was a complete surprise and one Shervin doesn’t think she deserves.

“There are so many volunteers who do more than I do, but I’m very appreciative they chose to recognize me,” she said.

Also honored was Dr. Thomas Madejski, who received the Mary Janet Sahukar Award, named for the woman who was instrumental in forming Hospice years ago. Madejski was also presented with citations by Senator Robert Ortt, Eileen Banker on behalf of Assemblyman Stephen Hawley and George McNierney representing Congressman Chris Collins.

“Dr. Madejski has spent countless hours serving hospice patients in their homes, at the hospital, nursing home and in the Martin-Linsin residence,” Spychalski said. 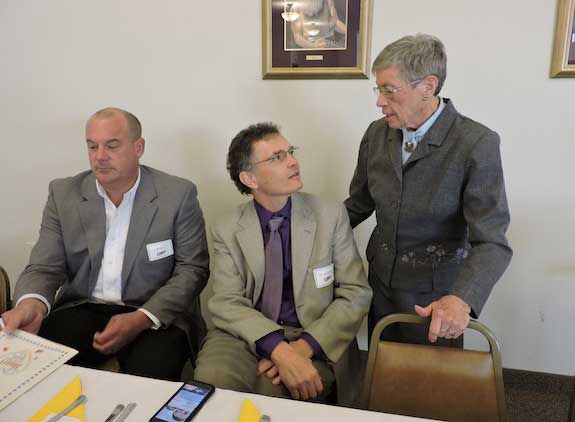 Jean Shervin, standing, chats with Dr. Thomas Madejski just before they were both honored by Hospice of Orleans County at the organization’s annual meeting and volunteer appreciation luncheon Thursday. Shervin was named Volunteer of the Year, while Madejski received the Mary Janet Sahukar Award for his support of Hospice. At left is Dr. Andrew Esch, who is taking Madejski’s place as Hospice’s medical director.

Madejski has stepped down as medical director for Hospice.

Taking his place is Dr. Andrew Esch, who is certified in hospice and palliative medicine and internal medicine. He is also a consultant for Roswell Park Cancer Institute, Catholic Health and the National Center to Advance Palliative Care, and is medical director for the Palliative Care and Survivorship of Western New York.

He said two of the biggest unsung heroes at end of life are volunteers and caregivers.

“An organization the size of this speaks volumes about the way this community comes together to help others,” Esch said.

“They have been strong supporters over a number of years, contributing to several of our pursuits, including providing funds for IT needs, renovations to our administrative offices and most recently, upgrades for the Martin-Linsin residence,” Dix said.

David Mitchell accepted the award on behalf of the Curtis Foundation. 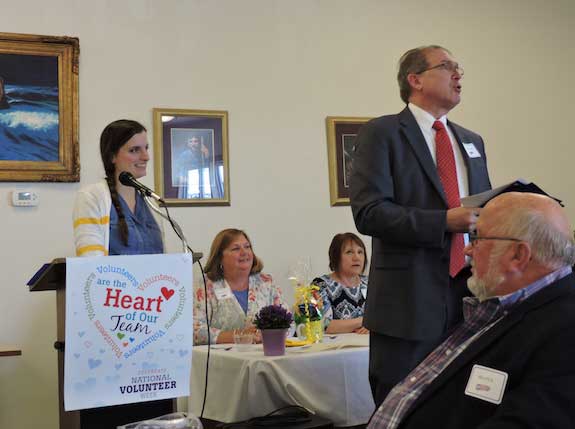 Brittany Dix, Development manager at Hospice of Orleans County, stands at the microphone after David Mitchell accepted the business/Civic Award on behalf of the Curtis Foundation at Hospice’s annual meeting and volunteer luncheon. County Legislator Bill Eick is at right.

Chris Fancher, volunteer coordinator, said their many volunteers never cease to amaze her.

“Their generosity can be seen each and every day at Hospice of Orleans,” she said before calling the names of more than three dozen individuals who volunteer in many capacities for Hospice, from office work and grocery shopping to sanitizing medical equipment.

One volunteer, Gil Cain, holds the record for volunteer hours, with 400.

Fancher also announced that volunteer Florence Surdi has been chosen by Orleans County Office for the Aging as Senior Volunteer of the Year. She will be presented with her award in Albany in May.

In addition to recognizing volunteers, Hospice conducted its annual meeting. Vice chair Maura Pierce shared highlights of 2017, calling attention to the total number of volunteer hours (5,975), which saved the organization $111,194. 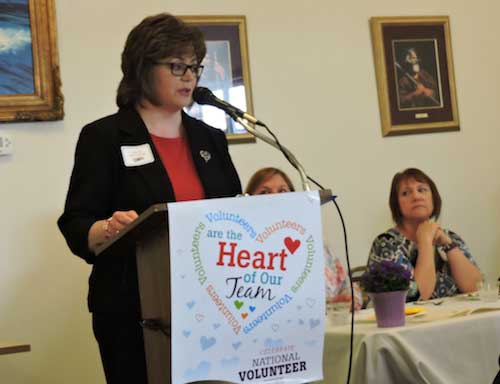