This coming Saturday night – Oct 3rd – will mark the seventh annual Ghost Walk at Mount Albion Cemetery. Each year for the past six years, AHS students work hard to research various residents of the cemetery and don period costumes to portray the historical Albion citizens during their Ghost Walk. This year, the walk will highlight war heroes, distinguished citizens, and two murders and will end at the grave site for our beloved Charles W. Howard – a.k.a. Santa Claus! Click here to read the line-up and find information on how to reserve a spot on the tour – it isn’t too late to get in on this popular event!

The event benefits the AHS Drama Department and each year the students choose a project to fund with part of their proceeds from the event. Last year, after the 2014 Ghost Walk, the students decided to design and purchase an interpretive panel to commemorate Charlie Howard. The panel details the life and accomplishments of the founder of the world renowned Santa Claus School, which he opened in Albion in 1937 and ran, along with his Christmas Park, until shortly before his death in 1966. Charlie was an Albion Alum from the class of 1915.

Today, the finished panel arrived and was set in place near Charlie’s grave site just in time to be featured during the 2015 Ghost Walk! The students did an amazing job of designing the 2×3 foot panel and ensuring Charlie’s legacy is on permanent display located along one of the main roadways in Mount Albion Cemetery. To find the panel, enter through the west gate (closest to the pond) and head straight back towards the pump house. The panel is on the left hand side, right across from the gazebo.

Here are some photos I took this morning as it was being set in place: 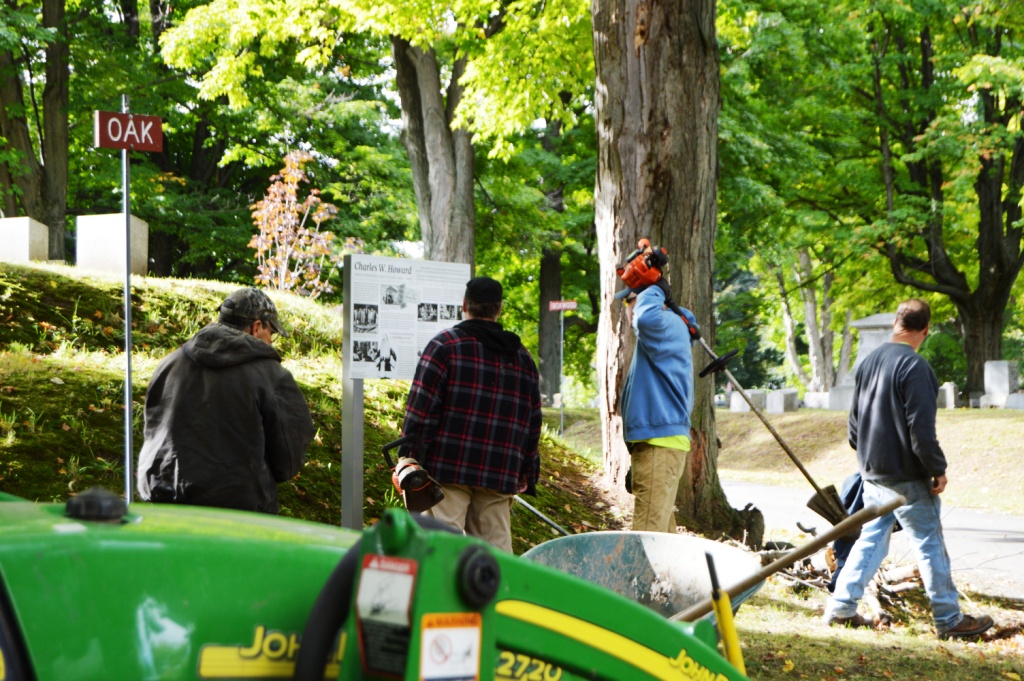 Mt. Albion Cemetery staff finishing up their work to set the sign in place the morning of Thursday, October 01, 2015. 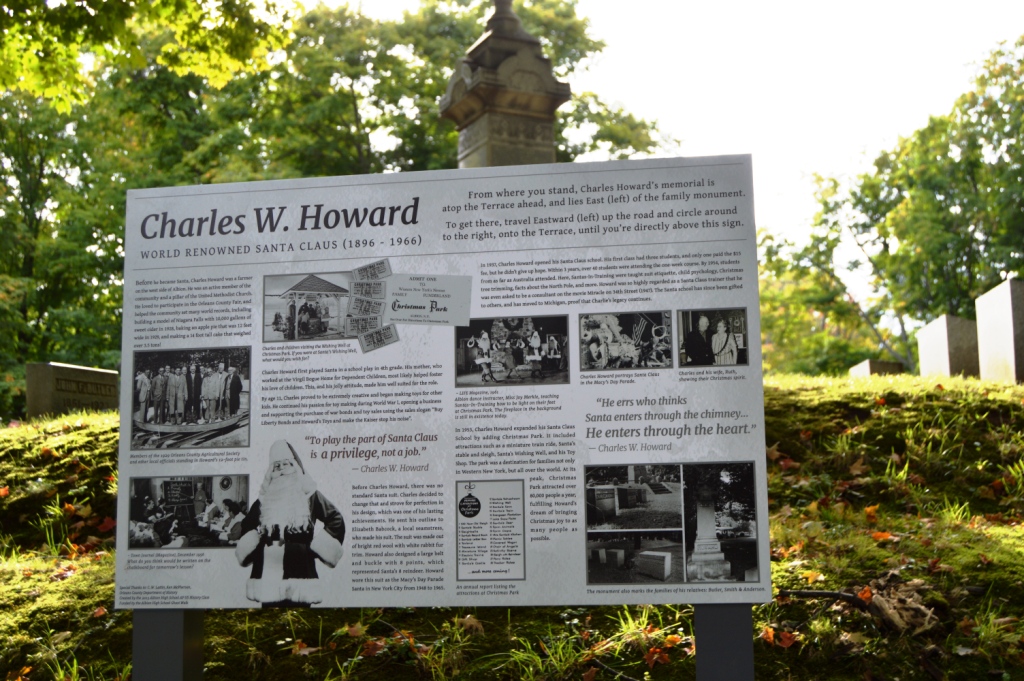 The students who worked on the concept and design of this interpretive panel are to be commended for a job well done! 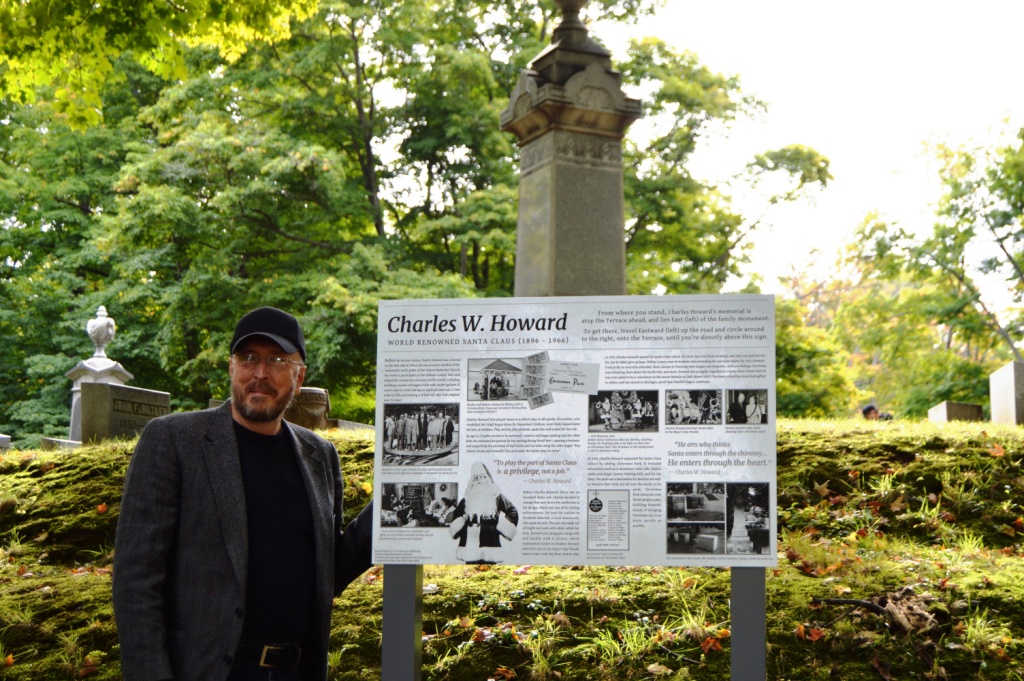 Pictured with the sign is retired County Historian, Bill Lattin (AHS class of 1963 and former AHS teacher). Bill was an advisor on the project. 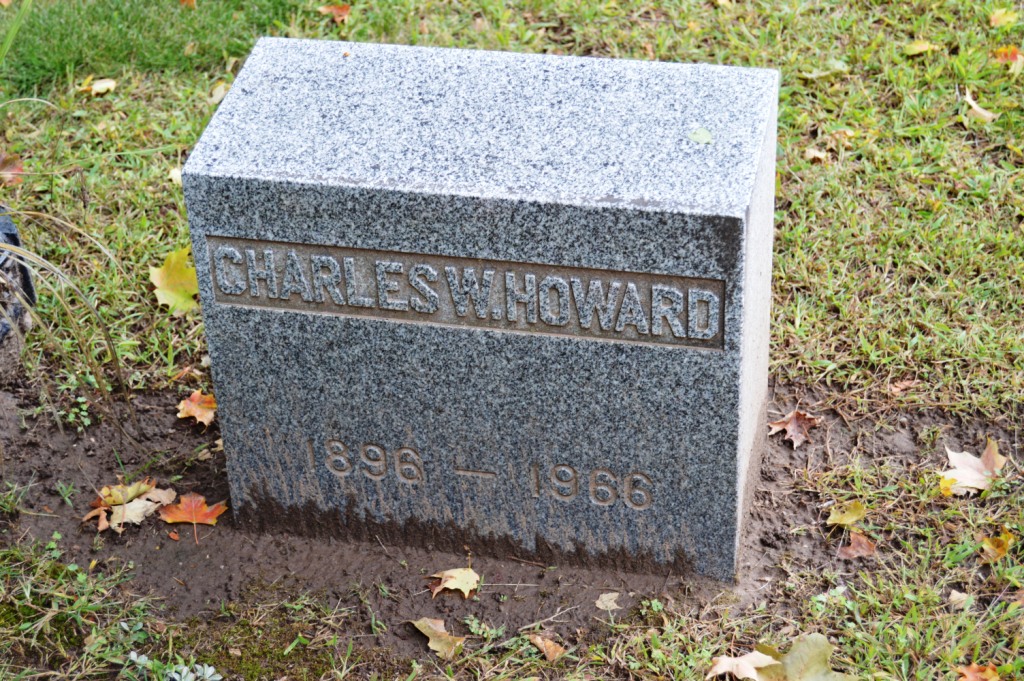 Charles W. Howard is buried in a family plot on a terrace on the corner of Marigold and Oak Rds right behind the panel. 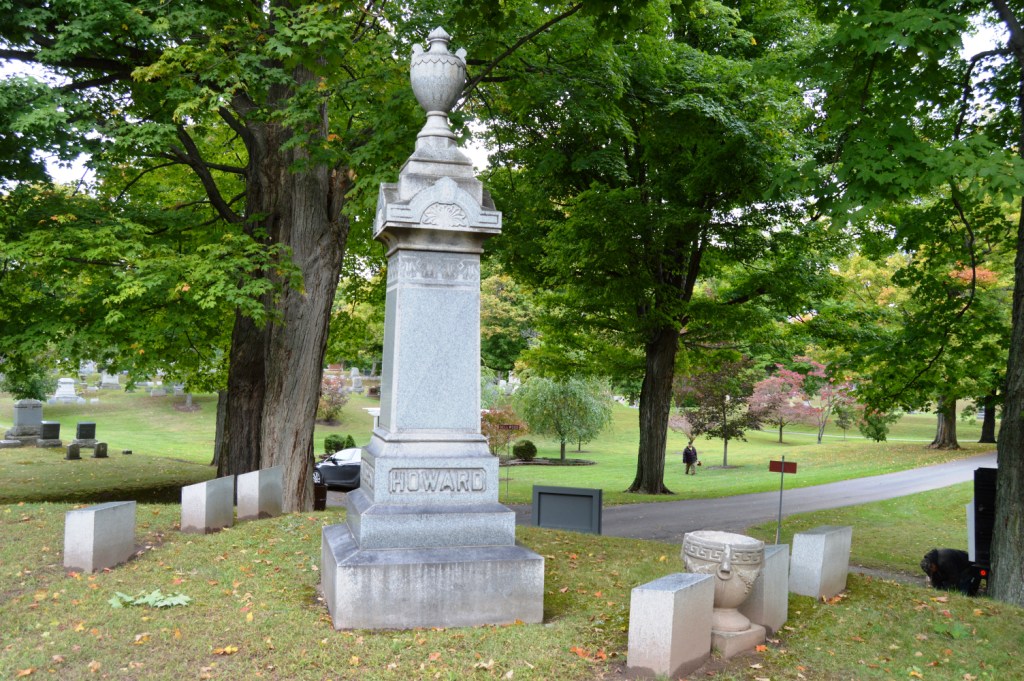 The panel can be seen just to the right of the Howard family monument. 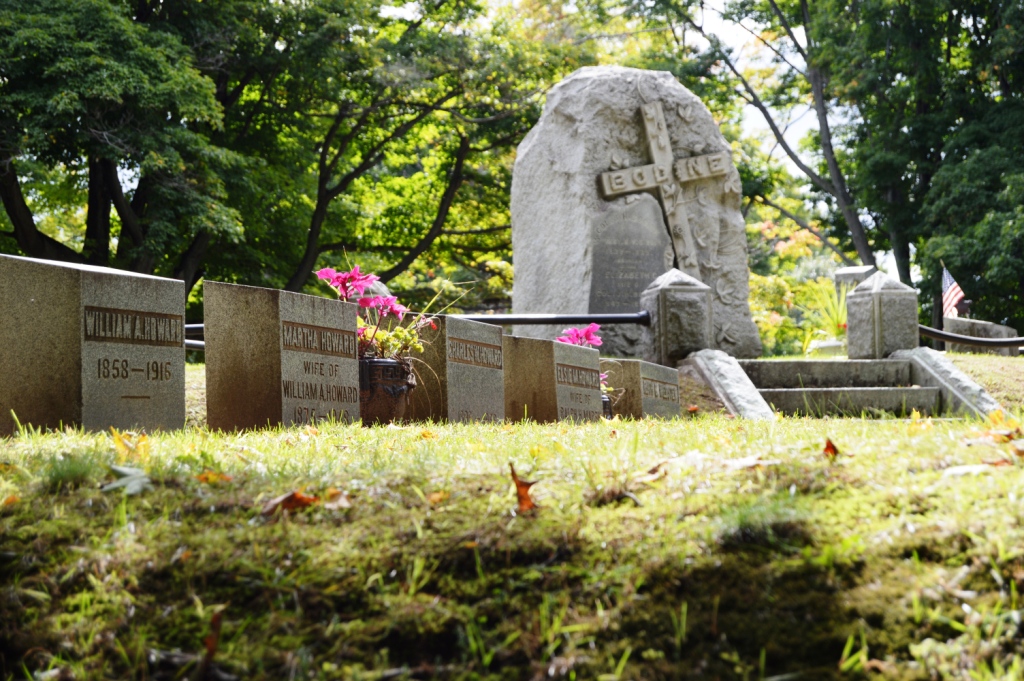 Charlie Howard’s grave is the third from the left, along side his parents to the left and his wife – second to the right after Charlie’s stone. 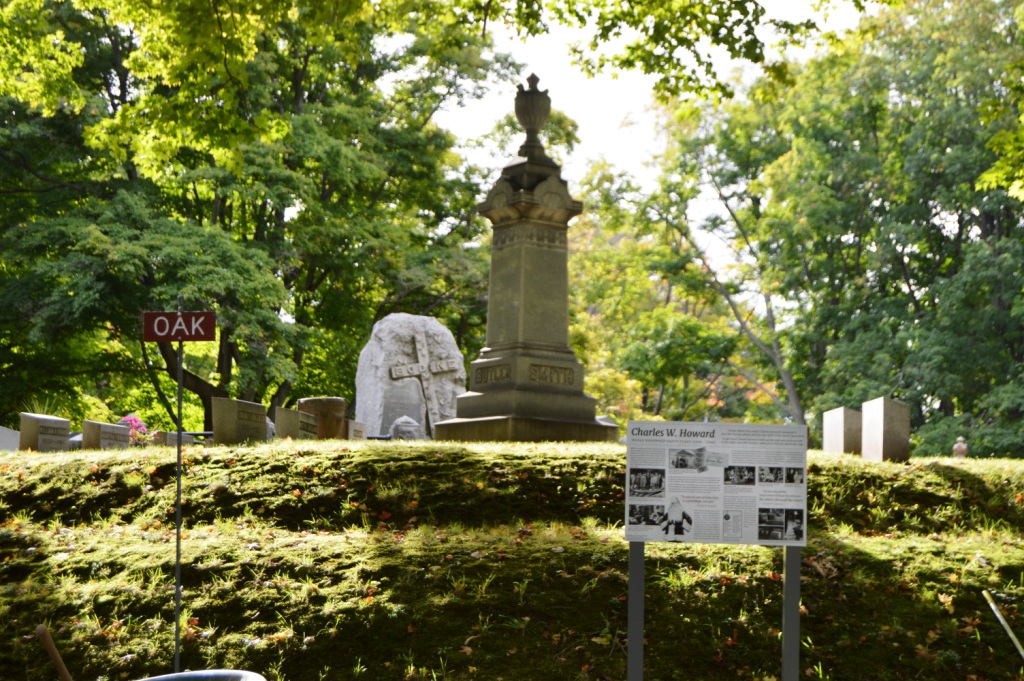 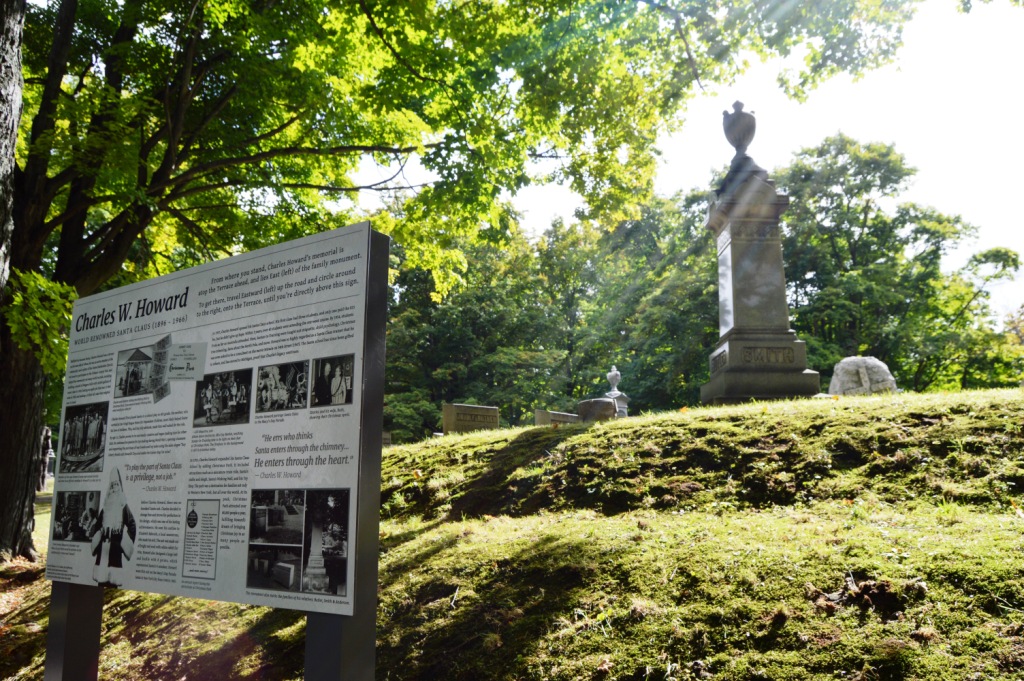 Sue Starkweather Miller, class of 1981 and one of the organizers of the annual Ghost Walk, and Bill Lattin hope that this will be the first of several interpretive panels that will be placed at various locations throughout the cemetery – creating a “museum without walls” to commemorate a variety of renowned citizens and/or events in Albion’s history.